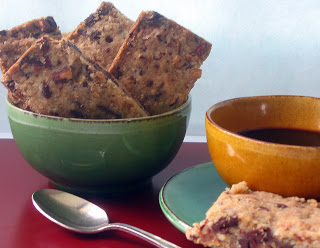 For more than half a dozen years I’ve bought decadent chocolate and almond-studded shortbread cookies from one of the bakers at my local farmers’ market. Although I’ve used all sorts of ploys to get the recipe, the merchants have shared only small tidbits about the bars. “Yes, they do have extra dark chunks of chocolate in them,” they confirmed, and “Yes, there is a hint of sea salt,” they have told me. Beyond that, they have politely avoided revealing any other tips.
I’ve made these bars countless times, always with good results, but never quite like the original. I even printed a recipe for them in my syndicated column, and have included them in several cooking classes. Finally, after several recent tries, victory was mine. I simply switched from bittersweet to 70% dark chocolate and lowered the amount of sugar!

END_OF_DOCUMENT_TOKEN_TO_BE_REPLACED

My good friend, Gayle, who recently returned from living with her husband in the Middle East for several years, told me that while abroad she loved making brownies because they were redolent of home. When entertaining, she often ended meals with a plate of these quintessential American treats.
She began her brownie marathon with a recipe titled “Katharine Hepburn’s Brownies” that she discovered on the internet, but over time she added her own touches. In the original version there’s a cup of chopped walnuts, which my pal (a definite chocoholic) replaced with chocolate chips, and to counter the extra sweetness she cleverly added a hint of vinegar to the batter.
This week when Gayle arrived for a visit at our house, she brought a batch of the delectable creations with her. One bite and I knew that these brownies with their movie star pedigree would be perfect for Oscar night, this Sunday, February 26th! Dense, moist, and intensely chocolate, they would make perfect nibbles for savoring during the show. I couldn’t resist adding a special garnish and topped each square with a white chocolate star.

END_OF_DOCUMENT_TOKEN_TO_BE_REPLACED 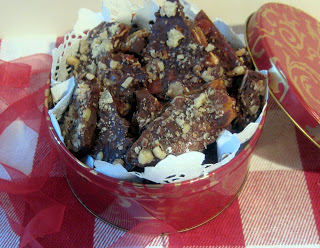 If you love to prepare treats from your kitchen as holiday gifts, you’ll want to try the following recipe for chocolate-coated toffee with almonds and walnuts. Last year around this time, my talented assistant, Diana, brought me a small carton filled with a cache of these addictive morsels.

I asked if she’d share her recipe, and was stunned to discover how easy this toffee was to prepare. “Three easy steps,” she smiled and explained. END_OF_DOCUMENT_TOKEN_TO_BE_REPLACED