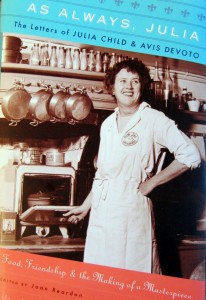 A collection of letters written in the 1950s between Julia Child and her pen pal, Avis Devoto, this book reveals a fascinating correspondence between two women, both avid fans of French cooking, living on opposite sides of the Atlantic. Julia was in France when she read an article on knives in Harper’s magazine by Bernard Devoto (Avis’s journalist/ historian husband who taught at Harvard). In his piece he was crusading for American women to find good carbon steel kitchen knives, and Julia responded by sending him a French “couteau.” Avis wrote the thank you for her spouse, and the long correspondence began. A well connected book reviewer in the Boston area, Avis became Julia’s champion, END_OF_DOCUMENT_TOKEN_TO_BE_REPLACED