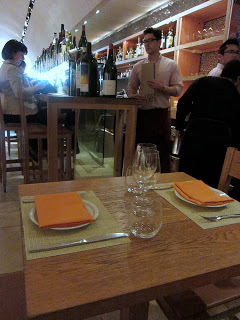 For my birthday last month, my husband planned a short visit to New York for us to have dinner and then to see “War Horse,” a new play at the Vivian Beaumont Lincoln Center.  He took care of the theatre tickets and left me in charge of the dining arrangements.

I chose Bar Boulud since it was close to Lincoln Center, and because I am a fan of several of Daniel Boulud’s other restaurants.

Long and narrow with an attractive bar running along half the length of one side, Bar Boulud has a contemporary vibe. Our meal began with some amuse bouches—warm, savory little gougères that melted in our mouths. My spouse’s first course of snails and pommes dauphines (golden, fried balls of mashed potatoes) were both cleverly served in a special cast iron pan that had small circular indentations. He liked his garlicky critters, and I thought my cold chicken terrine was delectable.

Our entrees, however, failed to impress. My grilled tuna arrived barely warm accompanied by crispy chickpea batons that were good but not outstanding. A garnish of of roasted eggplant was okay, but didn’t lend any color to the plate. My husband’s coq au vin—a dish so classic that there should have been no problem—lacked flavor and depth. We shared a chocolate cake square topped with a lemon layer and served with a scoop of rich chocolate ice cream for dessert. Although our dinner was not perfect, I would return. The staff were helpful and well informed, and there was a warm and welcoming atmosphere. Every restaurant can have an off night—I think we hit one of them.

“War Horse,” however, was a winner on every front!  First shown at London’s National Theatre, it received rave reviews there as it has on this side of the Atlantic. It is essentially a story of boy and his horse, the latter sold to the British Army during World War I for battle duty. Thousands of horses were conscripted during this war and only a handful returned. The magnificent horses in the play are puppets, brought to life by amazing puppeteers. The staging, puppetry, and production are all outstanding. War Horse info

What could be a better birthday celebration than dining out before going to the theatre in the City!

One thought on “Dinner and a Play in The Big Apple”