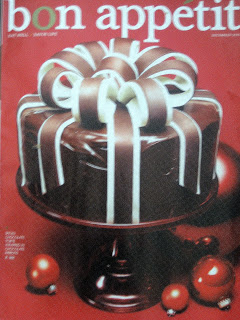 Imagine my surprise when I picked up my December Bon Appetit and saw a gorgeous new cover photo of the chocolate ribbon cake I had created for the magazine in 1984! Barbara Fairchild, who’s been at Bon Appetit for over 30 years, most recently as editor-in-chief, commissioned the original story, and more than a quarter century later decided to bring the cake back to life for a new generation of readers. In her Letter From the Editor she gives this dessert a big compliment explaining that “Twenty six years later, it remains our most requested recipe, generating more mail over a longer period than any other recipe we have ever run.”
Looking at that beautiful new picture brought back some funny memories for me. In 1987 the ribbon cake was included in my first book, Betty’s Rosbottom’s Cooking School Cookbook.  When I traveled around the country doing PR, the cake went with me. I placed it in a tall cake box and tucked it into an LL Bean canvas bag along with a pasta machine used to make the ribbons. It was pre-9/11, so no one questioned the large carry-on I slid under the seat on my flights.
During one leg of my tour, I traveled up and down the West Coast.  The cake and I were fine until I encountered a February heat wave in Los Angeles. The high temperature made the glaze start to melt and the oozing chocolate smudged the ribbons. Then a zealous airport official roughed up the cake as it went through security so that it tilted  like the Tower of Pisa. By the time I had arrived late at night in Seattle, I was in a panic. I  called the hotel kitchen and told them of my dilemma. The staff invited me down and helped remove and clean the ribbons, straighten the layers, and whip up more chocolate glaze. An hour later, restored to its former glory, the gateau sat safely in the kitchen’s big fridge.
The next morning I went to several interviews with the ribbon cake intact and then flew to San Diego to end my week-long odyssey. For my last event, I brought the cake to a local TV station where I did a short segment.  I had been planning to discreetly dispose of the ten-day-old, restored cake after the show, but the host invited a 100-year-old woman in the audience to join us for a birthday slice! All I could think of was that I didn’t want to see this sweet little old lady’s demise in front of my eyes.  The cake had logged thousands of miles, had undergone pastry surgery, and had spent most of the week unrefrigerated. “Would it kill?” was my concern.  Apparently not. The centenarian ate the slice and walked out of the studio with the rest of the cake. I never got an emergency call. This cake has more than just a few things going for it—looks great, tastes fabulous, and, oh yes, travels extremely well!
Look for the recipe for the Chocolate Ribbon Cake on page 100 in the December 2010 issue of Bon Appetit. You can also find it in Bon Appetit Desserts: The Cookbook for All Things Sweet and Wonderful, a collection of more than 600 Bon Appetit favorites.