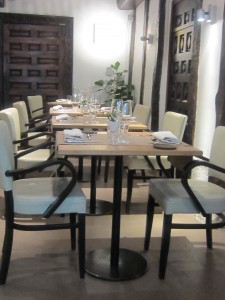 Not one, but two friends who live in Paris suggested that I try Sola, a new restaurant in Paris’ fifth arrondissement, so I quickly made a lunch reservation. Located near the Seine on the Left Bank, only a stone’s throw from Notre Dame, the restaurant is housed in a 17th-century building, and features the exquisite food of Hiroki Yoshitake, a Japanese chef, who trained at the 3-star Astrance. There are two dining rooms—La Salle Française on the main floor with its striking beamed ceilings, and Les Salons Japonais below in the vaulted cave with its stone walls and Japanese-style tables and benches. (In the latter, you remove your shoes before dining.)

The food is French with subtle Japanese accents. My first course was a perfectly cooked slice of caramel-coated foie gras set atop a toasted slice of pain de mie and garnished with a drop of miso sauce and another of crème de foie gras sauce. Another highlight was a fish first course in which grilled scallops were accompanied by cooked slices of salsify and white radish all floating in a celestial fish bouillon with peppery accents. My husband’s tender slice of beef served with smoked onions and house made mustard did not disappoint. And for dessert, the petit pears roasted with jasmine offered with scoops of velvety smooth vanilla ice cream and crème de jasmin for dessert were at once both earthy and delicate.

At lunch there are two menus, including one at 35 euros and another at 50. We had the former and felt there was plenty to savor. In the evening the menus run 55 and 75 euros. If you’re going to Paris and want an exceptional meal at an affordable price, this is the place to reserve.