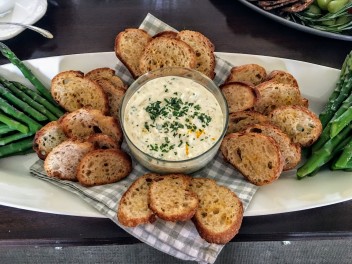 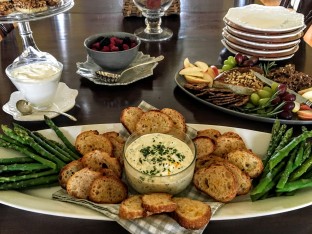 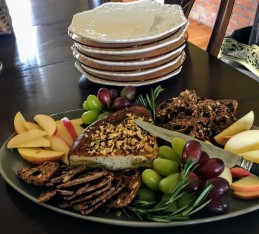 Earlier this month when it was my turn to host book club, I was at a loss for what to serve. We always have a generous offering of seasonal appetizers and sweets, but this year in New England spring has brought cold temperatures and even snow to us. Finally, I came up with a menu: a hearty and savory Gorgonzola cheesecake garnished with grapes, apple slices, and crisp crackers, plus a creamy fresh crab dip with orange-scented toasts, and caramel almond squares accompanied by a bowl of berries and whipped cream.

The crab dip, my nod to warmer weather, was a big hit with my fellow readers. Its creaminess comes from cream cheese whipped with Parmesan, and then seasoned with spring accents of tarragon and chives, plus a hefty citrus note of orange. Served atop END_OF_DOCUMENT_TOKEN_TO_BE_REPLACED I tweaked the recipe slightly, replacing the lemon and orange seasonings with the more assertive flavor of lime. And instead of  Monterrey Jack, I used Mahon, a delicious slightly sharp Spanish cheese. I also experimented with both whole wheat and regular flour tortillas, and found that each worked well. END_OF_DOCUMENT_TOKEN_TO_BE_REPLACED