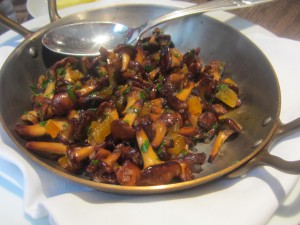 Chanterelles with Diced Apricots from Spring

If you asked me where I had the best meal of the summer, the answer would be easy. It was in Paris last month at Spring, a fairly new restaurant whose chef and owner is Daniel Rose, an American from Chicago. For months, I had tried to get into this restaurant where inventive food is served as a multi-course meal both at lunch and dinner. Then my friend and respected food critic, John Talbott, invited me to join him and and his wife for déjeuner there. END_OF_DOCUMENT_TOKEN_TO_BE_REPLACED 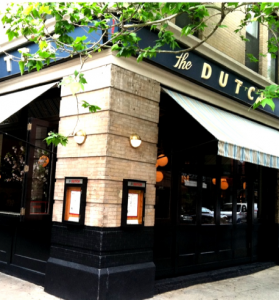 I became a fan of Andrew Carmellini’s cooking when he was at A Voce near New York’s Madison Park. Last year when he opened Locanda Verde downtown, I made a reservation a month in advance, and it was worth it. The Italian offerings were creative, perfectly cooked, and served by a helpful staff. So, when I read that this talented chef was opening a new American place called The Dutch in Soho, I couldn’t wait to try it. I met Natanya, my young friend and talented cook, for lunch there recently, and over a two-hour meal we sampled dishes until we could eat no more.

It’s hard to describe the food at The Dutch except to say that it is inventive, yet surprisingly simple, with an emphasis on quality ingredients. There’s plenty of fresh fish (with a first-rate oyster selection), choice meats, and no end of local produce. A welcoming treat arrived the minute we set down: a small warm loaf of peppery corn bread and sweet butter set on a wooden board. Most of it disappeared before we had even glanced at the menu. END_OF_DOCUMENT_TOKEN_TO_BE_REPLACED