When my husband and I were newly married, the only tuna that ever came into our home was in a can. And, it was always turned into tuna salad for sandwiches. Years later I discovered fresh tuna steaks at the supermarket fish counter. Yes, they were on the expensive side, but they were delicious and could be cooked quickly and served with a simple sauce or mayonnaise. My spouse, who thinks all (well most all) fish should be fried didn’t embrace fresh tuna as enthusiastically as I did. That is not until I END_OF_DOCUMENT_TOKEN_TO_BE_REPLACED 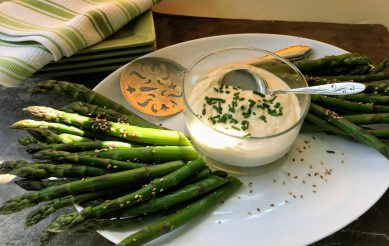 For over a year my book club met on Zoom, but this month, with restrictions lifted in Massachusetts and all in our group fully vaccinated, we felt comfortable gathering in person!  I offered to host, and couldn’t wait to see my pals who love to snack while they discuss literature. Since we meet in the late afternoon, I decided that two savories and two desserts would be just right.

A no-bake lemon cheesecake drizzled with warm blueberry sauce (I’ll be including it in a cooking class next week!) plus dark chocolate and almond-studded short bread bars satisfied our sweet cravings. And, a block of feta roasted in a baking dish with multi-hued cherry tomatoes was offered warm with crispy baguette slices. A quick sesame and orange-scented mayo dip surrounded by blanched asparagus spears sprinkled with toasted END_OF_DOCUMENT_TOKEN_TO_BE_REPLACED For the past few weeks I’ve been making large skillet pancakes, often referred to as Dutch Babies or German pancakes. They are considered a cross between a popover, pancake, and crepe. What I like best about this type of pancake is that you pour the batter into a single ovenproof skillet or pan, put it in a hot oven, and watch as the edges climb up the sides of the pan while it cooks. Although I started by making savory fillings for this dish, I fell in love with a sweet one that is prepared with sautéed berries tossed in orange-scented sugar and topped with dollops of crème fraîche whipped cream. I don’t know about you, but I am tired of my own cooking. For more than a year, I’ve prepared pastas, varying the shapes and sizes, as main courses, assembled myriad versions of hamburgers, and roasted everything imaginable. When I mentioned this to my good friend and longtime assistant, Emily Bell, she suggested that I make a favorite soup of hers from my book, Sunday Soup. The recipe she had in mind was for a cream of parsley soup. “Pair it with a sandwich, and  you’ll have an easy and delicious spring supper,“ she declared.

The next day I pulled out the recipe and marveled at the simplicity of this dish I had created over a decade ago. It called for fresh parsley and leeks END_OF_DOCUMENT_TOKEN_TO_BE_REPLACED 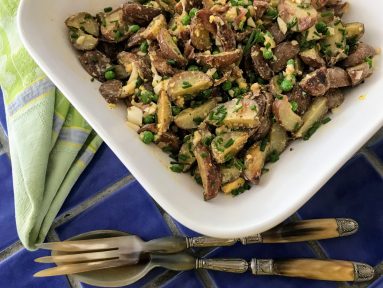 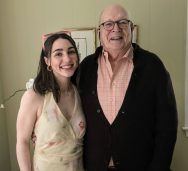 This past Easter Sunday was the first holiday we’ve been able to celebrate with our family in more than 15 months (Christmas 2019 was our last!). To say that my husband and I were excited about seeing our teenaged grandchildren would definitely be an understatement! And, as usual for this special spring celebration, I offered to cook the meal with my son, Mike. He took care of the meat and fish, while I prepared sides, including a END_OF_DOCUMENT_TOKEN_TO_BE_REPLACED Although the calendar announced that it was spring back on the 21st, not every day here in New England has reflected the new season. We’ve had some 60 to 70 degree highs, and also seen the thermometer drop into the 30s, especially in the evening. To counter the mercurial weather, I’ve been cooking dishes that work whether it’s warm or cold outside. One such recipe for Crispy Pork Cutlets with Arugula and Fennel Salad has been especially well suited for this “in between” season.

A few weeks ago at a local supermarket, I spotted a package of sliced pork tenderloin. I’d never seen pork tenderloins offered that way, and immediately added a container to my cart. At home, I pounded the pork END_OF_DOCUMENT_TOKEN_TO_BE_REPLACED As I finished taping a short TV cooking segment for Mass Appeal, a popular midday talk show that airs weekdays on our local NBC affiliate, I couldn’t wait to take a sip of the Irish coffee I had just demonstrated. Enlivened with a touch of Irish whiskey and topped with a cloud of softly whipped cream, it was heavenly! Some things never go out of style, and classic Irish coffee is one of them.

This coffee has an interesting history that starts in Ireland and finishes on the West Coast of the U.S. As the story goes, the drink was created in the Shannon airport in the mid-twentieth century where it was a restorative offering served to weary passengers. The recipe arrived in the States with a San Franciscan who shared it with his hometown’s Buena Vista Bar. This special coffee became the signature drink of that California bar, and eventually its popularity spread around the globe.

I’ve been making some version of the recipe for more than three decades. And, I always add the cream the way a good friend (a professor of Irish literature) suggested: “Hold a tablespoon with the back facing up over the cup of coffee, and then ladle the cream onto it so it gently falls onto the coffee and floats rather than sinks.” I still do it that way!

Happy Saint Patrick’s Day to everyone! A few months ago, I received an email from a woman who had lost a recipe of mine for Baked Penne with Italian Sausage and Porcini. It had appeared in The Columbus (Ohio) Dispatch newspaper way back in 1991. She explained that the dish held special sentimental value to her since she and her now husband had cooked it together on one of their early dates. After emailing a copy to her, I made a note to try the recipe myself, and finally got around to it this past week.  I loved the flavors of this casserole—sautéed Italian sausage and porcini mushrooms and a quick homemade tomato sauce paired with penne, all topped with sliced fresh mozzarella.

Several decades later, I tweaked this recipe to fit my lifestyle today. The END_OF_DOCUMENT_TOKEN_TO_BE_REPLACED For the past few weeks, I’ve been revising a recipe for decadent chocolate cupcakes prepared with three different types of chocolate. For these heavenly little treats, cocoa powder and chocolate chips add a double burst of flavor to the cupcake batter, while the luscious glaze is prepared with chopped semisweet chocolate melted with cream and butter. It took several tries to tweak this recipe that I first made over a decade ago, but, being a certified chocoholic, I savored every bite of every batch.

Because my husband and I are empty nesters, still working and staying in END_OF_DOCUMENT_TOKEN_TO_BE_REPLACED Everyone has a guilty food pleasure. You might think mine would be some chocolate caramel brownies (the creation of a friend who is a talented baker), or Southern pecan pie  (my favorite dessert growing up), or maybe a millefeuille (that incredible French puff pastry layered with a cream filling) from a patisserie in Paris, but you would be wrong! It’s a McDonald’s filet-o-fish sandwich—a golden fried fillet of white fish topped with a slice of (processed) cheese and a dollop of tartar sauce, all enclosed in a soft white bun. For years, I’ve ordered this sandwich along with a bag of fries instead of their burgers. Recently though, due to warnings of a higher Covid 19 spread in our area, I’ve had to forego my “Mcdulgence,” and resort to making the sandwich in my own kitchen.