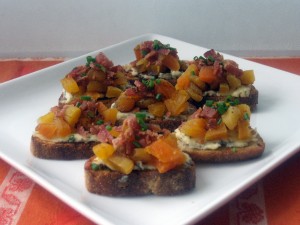 Okay, if you’re like me, appetizers are the last thing on your mind when planning a Thanksgiving menu. After all, there’s the big bird in the oven, the dressing to tend to, plus all those sides and desserts.

But those little nibbles we offer with glasses of wine do set the tone for the parade of dishes to come. My golden rule: appetizers served on Turkey Day should be simple to make, tasty, and not too filling. Apricot, Bacon, and Blue Cheese Toasts deliver with panache.

There’s practically no cooking involved. You brush baguette slices with olive oil, then pop them in the oven for a few minutes until they turn golden. Take a few minutes to saute some bacon slices until they are crisp. The assembly is the easiest part: spread the toasts with creamy blue cheese, top that with diced dried apricots, and then garnish with crumbled bacon and chives. The salty notes from the cheese and bacon offer a fabulous foil to the sweetness of the fruit. Don’t be surprised if these little toasts seem to disappear into thin air.

1. Arrange a rack at center position and preheat the oven to 350 degrees F.

2. Brush baguette slices generously on both sides with olive oil, and place them on a baking sheet. Bake slices until just crisp, about 3 minutes per side, 6 minutes total.  Remove and cool. (Bread can be toasted 3 hours ahead; cover loosely with foil and leave at room temperature.)

3. Saute the bacon in a medium skillet over medium heat until crisp, 3 or more minutes, and then drain on paper towels, or cook in a microwave.  Chop bacon coarsely. (Bacon can be prepared 3 hours ahead; leave uncovered at room temperature.)

4. To assemble toasts, spread each baguette slice generously with a layer of blue cheese and then mound each with some diced apricots. Drizzle apricots with just a drop or two of balsamic vinegar. Then garnish each toast with some bacon and chives. (Toasts can be assembled 1 hour ahead.) Makes 20 toasts.

Note: When you drizzle the apricots with balsamic vinegar, be careful not to overdo it. You only want to add a drop of two. You can use a teaspoon for drizzling or put the vinegar in a pour bottle with a small opening.