While culling my files for a dessert to use up the cranberries remaining in my fridge, something fortuitous happened. I was tagged on Instagram by a person whose handle is #bakerynerd. The writer posted that they had recently baked a cranberry orange upside down cake created by me! It took a few minutes to locate the recipe that had originally appeared in 1999 in my former syndicated column, “That’s Entertaining.” I was thrilled that this mystery baker had enjoyed the cake, and pulled out the recipe to try it 20 years later.

Nothing could have be simpler. Cranberries, quickly simmered with sugar and orange juice along with a pat of butter, were spooned into a cake pan END_OF_DOCUMENT_TOKEN_TO_BE_REPLACED f you (like me) are just now thinking of making a special dessert for Valentine’s Day, here’s a recipe for a delicious dark chocolate cake that I first baked more than a decade ago. It is not complicated to prepare, and calls for easily found ingredients at most supermarkets. Each time I’ve served it, I noticed that there are rarely any leftovers.

This flourless confection is assembled with dark bittersweet chocolate, plenty of butter, plus eggs and sugar. What distinguishes this cake from others, though, is a generous END_OF_DOCUMENT_TOKEN_TO_BE_REPLACED “If in doubt, choose chocolate,” has always been my mantra. So when my husband and I host a supper at our house next week for his class at Amherst College, guess what the the dessert will be!  Definitely a chocolate creation, and in this case a rich dark chocolate caramel cake.

What makes this luscious single-layered confection unique is that the batter is studded with caramel candies that soften and blend into the dark chocolate mixture while baking.The recipe is based on one I spotted several years ago in a French magazine, but in the original version the candies were laid atop the batter. After baking the cake several times, I discovered that submerging the caramels so that they are completely covered produced a richer, more interesting texture. END_OF_DOCUMENT_TOKEN_TO_BE_REPLACED My husband joked last week that if you walked though our house you’d find every TV turned to the weather channel and each computer screen set on the weather forecast. We have had so much snow in western Mass that one might mistake our backyard for a scene from Siberia. To counter the chaos outdoors, I’ve made countless runs to the supermarket, loading up on food so I could cook during the storms. The dense, deep dark chocolate cake featured here has been one of my projects since Valentine’s Day is so close at hand.

This classic, flourless cake calls for four primary ingredients—bittersweet chocolate, butter, sugar, and eggs. You need only to melt the chocolate and butter together, stir in the sugar, and finally add the eggs one a time before pouring the batter into a deep sided pan and baking it.To give this traditional cake a little extra embellishment for Cupid’s Day, I cut out a paper heart and centered it on the top before dusting the cake with powdered sugar. A bowl of espresso-scented whipped cream is a tempting garnish. A view of our snow-covered back yard!

END_OF_DOCUMENT_TOKEN_TO_BE_REPLACED Years ago as a fledging syndicated columnist, I created a delectable genoise cake with pineapple rum buttercream icing. I didn’t worry for a minute that this dessert called for a hefty 3 sticks of butter and that it included multiple steps. Since this gateau has remained a personal favorite, I recently gave the recipe a facelift for Mother’s Day, reducing the butter, and streamlining the directions.

Genoise (from French for Genoese referring to Genoa) is the name of a sponge cake made with eggs, sugar, and vanilla. These ingredients are warmed over a pan of simmering water, then beaten in an electric mixer for several minutes until they have tripled in volume. Flour and melted butter are folded in next. When baked, this style of cake is golden and feathery light. For my genoise, I created an extra special buttercream icing with fresh pineapple. To make it, a pineapple sugar syrup is gradually beaten into egg yolks and then bits of softened butter are whipped in until the mixture is silken smooth. A touch of dark rum adds even more flavor. END_OF_DOCUMENT_TOKEN_TO_BE_REPLACED Fresh blueberries are in full season here in New England. At the local farmers’ market, every fruit vendor has bountiful displays of these luscious little orbs neatly packed in pint and half pint boxes. And, they’re not the only ones featuring this summer staple. The bakers are including them in pies and muffins, while the local yogurt maker is turning out blueberry smoothies sweetened with maple syrup.

I wasn’t surprised then when my culinary assistants, working in my kitchen last week, were all abuzz about blueberry recipes. Mary Webber, a new member of our team, described a simple blueberry pan cake that she has baked for years, and had us all pleading for the directions. END_OF_DOCUMENT_TOKEN_TO_BE_REPLACED 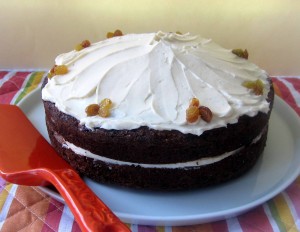 Early this spring I had a chance to dine at Ottolenghi, an excellent, yet unpretentious restaurant in the Islington area of London. My meal was so memorable that I wrote about it on my blog, mentioning a celestial Apple and Sultana Cake with Maple Frosting.

Back home, I couldn’t get the heavenly cake out of mind, and set out to reproduce it.  After multiple tries, including several failed icing attempts, I had a version close to my remembrance of the original. Then, by chance, I found the recipe for the Ottolenghi cake on line, reprinted from one of the chef’s earlier cookbooks. The British cake was made with olive oil, mine END_OF_DOCUMENT_TOKEN_TO_BE_REPLACED 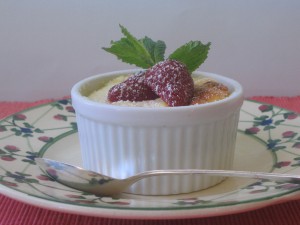 Lemon pudding “cakes” are actually a cross between a pudding and a light, airy souffle-like cake. In the following recipe, you simply cream butter and sugar, and then add egg yolks, lemon juice and zest along with milk and a small amount of flour. Finally, you fold in beaten egg whites, and bake until the batter is set. When done, the pudding cakes seem to divide into two distinct layers, an airy cake-like layer on top and a dense rich pudding one on the bottom. They are heaven to eat either warm, at room temperature, or chilled. END_OF_DOCUMENT_TOKEN_TO_BE_REPLACED

In October a young friend and former assistant told me of a Concord Grape Upside Down Cake that she had baked for a special dinner. Intrigued, I asked for the recipe, but put off trying it for a few weeks. By the time I got around to testing this seasonal dessert, Concord grapes had passed their peak, and my results were lackluster. The clever concept for an unusual upside down cake, however, stayed etched in my mind, and I began to think of other possibilities.   END_OF_DOCUMENT_TOKEN_TO_BE_REPLACED