The French have a long tradition of preparing slow-cooked stews, dishes that require a little extra time, but reward with their fork-tender meat and vegetables. Ragouts, as they are often called, are meals in themselves, and can be served alone or ladled over pasta, potatoes, polenta, or other grains of choice. Oh, and did I mention that these all-in-one dishes can be prepared ahead, and actually improve in flavor after resting in the fridge for a couple of days? Slow Cooked Lamb Ragout with Fennell, Tomatoes, and Garlic has all  these qualities, and is perfect to stave off the cold of winter, especially here in New England where I live. I’ve made this ragout several times this month for cooking classes and for friends. On each occasion people have commented on the tenderness of the braised lamb and vegetables and appreciated the lightness yet hearty accent of the sauce. To prepare it, lamb stew meat is END_OF_DOCUMENT_TOKEN_TO_BE_REPLACED Once I heard about her soup “buffet,” I couldn’t wait to try my own version!  The potato and leek soup which follows is a traditional French classic to which I’ve added a little crème fraiche plus half and half for a richer END_OF_DOCUMENT_TOKEN_TO_BE_REPLACED A few weeks ago in Paris I sampled a delicious leek and potato soup at a Left Bank restaurant called Les Sellae. Although potato soup cooked with leeks is a classic winter offering in France, the inventive chefs had enhanced their version with contemporary touches by finishing the potage with swirls of Taleggio cream plus sprinkles of crispy speck (an Italian deli meat similar to prosciutto) and fresh dill. I tried recreating the soup with good results in Paris, and once home in New England prepared it again with a few tweaks. As I took sips of this hearty, warming soup, I had a Eureka moment when I realized that it would be perfect to serve for The Super Bowl this coming Sunday!

The soup takes about 45 minutes start to finish, and can be prepared a day ahead. I replaced the speck with prosciutto and sautéed the julienned slices several hours ahead. For the Taleggio cream, I simply melted bits of the tangy Italian cheese in simmering cream at serving time.

To round out the menu, add a salad of mixed greens tossed in a lemon and shallot dressing, a warm crispy baguette, and a bowl of pears, grapes, or apples served with your favorite homemade cookies. What I love about the French is their willingness to absorb the best of other cuisines—whether specialty dishes or ingredients–into their own culture’s cooking. Today, it’s not uncommon to see lemongrass, yuzu, or burrata featured on Parisian menus. And, the French have their own versions of such all-American favorites as hamburgers, cheesecakes, and crumbles. Creative interpretations of gazpacho and risotto abound as well. In fact, I made my own version of risotto with French accents this past week!

For Winter Risotto with Chanterelles and Pancetta, I sautéed those golden, trumpet-shaped fungi along with brown mushrooms and shallots, then seasoned the mix with fresh rosemary. This risotto, prepared traditionally with arborio rice and simmering stock, took 15 to 20 minutes to cook, but was worth the effort. When done, the sautéed mushrooms END_OF_DOCUMENT_TOKEN_TO_BE_REPLACED Looking at my calendar I notice that this is the first day of spring, but peering out my window I view mounds of snow in our yard while the thermometer hovers in the 40s. So, as much as I am ready for a seasonal change, it’s still cold here in New England, and I’m craving foods to stave off the chill.

Grilled sausages served with pan-sautéed cabbage and bacon plus apple wedges sautéed in butter with caraway seeds is just the sort of no-fuss menu I love in this blustery weather. For the sausages choose a favorite cooked one (I always opt for kielbasa) and slice it into 3- to 4- inch lengths before grilling in a stove top grill pan or skillet until lightly charred. The two side dishes featured here, though, are the real stars of this meal. Each calls for only three primary ingredients and takes only minutes to prep and cook. END_OF_DOCUMENT_TOKEN_TO_BE_REPLACED

I’ve hosted two meals since arriving in Paris a few weeks ago. The first was a festive New Year’s Eve dinner that included several courses, while the second was a casual soup and salad supper for three millenials in Paris for studies or work. On both occasions, our meal began with a delicious winter salad prepared with frisée, scallops, haricots verts, and bacon lardons–so versatile it fit easily into each of these distinctly different menus. The recipe is based on Salade Lyonnaise, a celebrated French dish in which bitter greens are combined with bacon lardons, tossed in warm vinaigrette, and then topped with a poached egg. For my version I added blanched haricots verts and sautéed sea scallops to frisée (curly endive), and replaced the egg with a little cream in the vinaigrette. END_OF_DOCUMENT_TOKEN_TO_BE_REPLACED 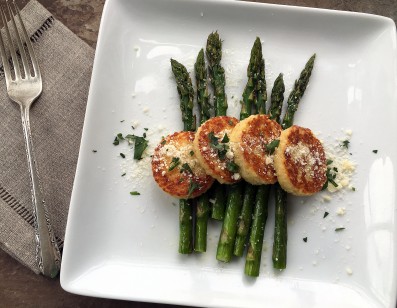 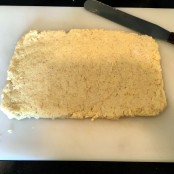 Gnocchi spread on a chopped board and ready to be chilled

Spring is officially underway, but New England hasn’t gotten the memo. Temperatures here recently climbed to 70, accompanied by clear, blue skies, and then fell suddenly to the 20s with a daylong snowfall. Each morning this week I’ve checked the weather even before my texts and email (a first!), debating what to wear. And, of course, I wonder what to cook! For a small dinner we hosted for out-of- town friends this weekend, I spent as much time planning the menu as preparing it. In the end the night’s dishes reflected this transitional time of year, satisfying yearnings for both cold and warm weather fare.

Our opener—gnocchi alla romana with roasted asparagus–was a good example.
The gnocchi, assembled Roman style with farina rather than potatoes, are enriched with Parmesan and butter, cut into rounds, and then baked. Served piping hot atop bundles of asparagus, they seemed to welcome spring and acknowledge winter at the same time. END_OF_DOCUMENT_TOKEN_TO_BE_REPLACED 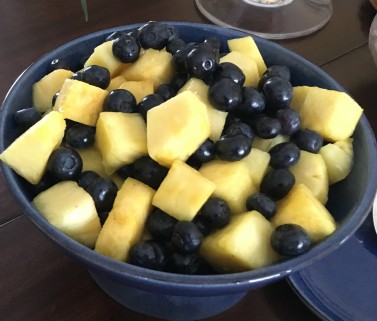 Discussion of Fates and Furies by Lauren Groff 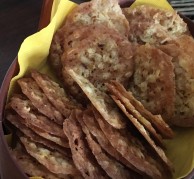 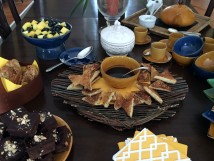 The table of treats

It was a freezing 9 degrees! and snowy when I hosted my book club this week. Undaunted by the weather, our group, almost unrecognizable dressed in their winter gear, arrived on time. I had ready warm tea, steaming espresso, and a small spread of treats to help defrost them!

A basket of paper-thin oatmeal crisps, a plate of cashew brownies (from my Valentine post last week), and a bowl of fresh pineapples and blueberries were set out. However, it was the grilled cheese tartines that were everyone’s favorite. END_OF_DOCUMENT_TOKEN_TO_BE_REPLACED Flying into Boston last week after a long stay in Paris, the first thing I noticed was how much colder it was. Winds were adding a blustery touch to the already freezing temperatures. When we arrived at our son’s house for the night, he had prepared a warming shepherd’s pie of root vegetables and beef topped with mashed potatoes. By the time we got to Amherst the next day, I was craving more robust dishes like this to stave off the cold. Coincidentally, my assistant Barb emailed a welcome home note, and mentioned that she was using a recipe of mine for old-fashioned pot roast, a hearty food to counter the season’s chill.

This pot roast is a favorite of mine. An inexpensive cut–a boneless chuck roast– is rubbed with crushed rosemary, basil, and red pepper flakes for extra flavor, then seared in hot oil. Next, the roast is slowly cooked several hours in the oven in an aromatic mixture of beef stock, red wine, tomatoes, and vegetables. In place of flour, some of those cooked END_OF_DOCUMENT_TOKEN_TO_BE_REPLACED Recently I read an article about zero-waste in commercial kitchens. The gist of the story was that many chefs have adopted a philosophy of using not just some, but all the food scraps and leftovers in their kitchen. One chef confessed that a dish he made with leftover broccoli stems was better than the original he had prepared with the crowns, and was now a staple on his menu. When I looked in my fridge later that day, and found a sizeable collection of partially used ingredients, I realized that a little zero-waste attitude could be applied at my house.

I spotted a half full container of mascarpone, a chunk of white cheddar, and some smoked kielbasa, as well as a package of mixed mushrooms and some butternut squash (remainders from some recipe testing). In a “eureka” moment I realized these could be the makings of a delectable winter pizza.

The only ingredient I purchased was an extra thin pizza crust. It was spread with mascarpone, sprinkled with grated cheddar, and topped with a mélange of sautéed mushrooms, onions, and kielbasa. Garnishes included roasted cubes of butternut squash and a final dusting of cheddar. END_OF_DOCUMENT_TOKEN_TO_BE_REPLACED