I’ve only set foot in Morocco once, and that was several decades ago when
I was a young student studying abroad in France. I spent a quick 24 hours in Tangiers, hardly long enough to become familiar with the country’s vibrant cuisine. However, in Paris where I was studying at the Sorbonne, I sampled specialties at many of the small, inexpensive couscous restaurants that still dot the city’s student quarter. Over the years in I’ve remained a fan of the fabulous tagines, like the one featured here today.

“Tagine” refers to the Moroccan vessel (a two-part clay pot with a pointed top resembling a tall hat) used, but also to the dish itself. If you don’t own a tagine (and I don’t), you can use a large, deep-sided pot to cook this stew of chicken thighs, scented with Moroccan spices, olives, and preserved lemons. The chicken, which can be prepared ahead and freezes well, is cooked until it is fork tender and melds with the other ingredients.

In a recent cooking class, I included this dish, along with traditional couscous that I sprinkled with toasted almonds and golden raisins.

In the space of a few minutes, there were no leftovers. This recipe is perfect for those of us who can’t get to Morocco, but who savor the country’s cuisine here at home or elsewhere. Last month, my friend and talented cook, Mary Francis, wrote me about an unusual Caesar salad she had tasted in North Carolina where she lives. It was prepared with a serving of warm Parmesan bread pudding surrounded by Romaine leaves and a spoonful or two of roasted tomatoes or red peppers. She wasn’t sure whether the red condiment was tomatoes or peppers, but she couldn’t stop raving about the creamy smoothness of the warm pudding contrasted with the crunchy lettuce. The minute I read her note, I knew that I wanted to try to recreate this clever dish, but I had no free time in May.

Fast forward a month to Paris where I’ve been in June. For the past two weeks I’ve made several versions, all to the delight of my husband, who adores any rendition of this celebrated salad. END_OF_DOCUMENT_TOKEN_TO_BE_REPLACED 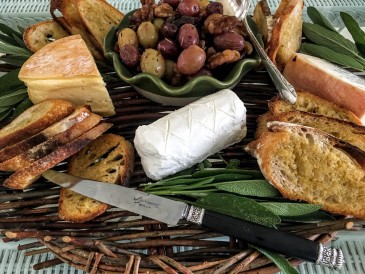 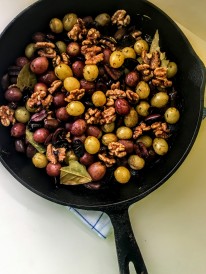 In the file cabinet wedged into the closet of my study, I keep folders filled with recipes clipped from magazines and papers or printed from the internet. These recipes are not categorized by type of food (which would be the most practical organization), but rather haphazardly by season with headings like: “fall/winter” or “spring/summer.” There are hundreds in countless folders. Recently, I spotted a recipe from the late 90s for roasted grapes and olives. It called for wine grapes and Picholine olives to be cooked in a skillet in a wood-fired oven. Because I didn’t have access to either wine grapes or a wood-fired oven then, I left the instructions filed away as a memory. But fast-forward almost 20 years, and I saw the recipe in a new light!

Red and green seedless grapes plus pitted Kalamatas stand in beautifully for the original ingredients. Walnut halves add crunchy texture, and herbes de Provence and bay leaves an herbal accent. Nothing could be simpler to prepare. I tossed everything with olive oil END_OF_DOCUMENT_TOKEN_TO_BE_REPLACED 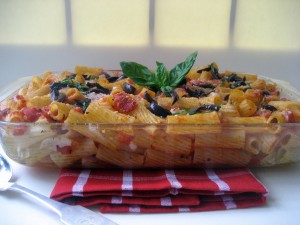 This recipe is a perennial favorite of students. Back in the 1990s it appeared on a winter cover of Bon Appétit and then later in my book, American Favorites. This dish has plenty going for it—you can make it ahead, it’s and all-in-one main course, and it’s inexpensive.